Kom Ombo, Luxor and The Valley of the Kings

Lert me tell you more about the amazing temples en route to Luxor! It was day four of our tour now. As I had written earlier, our boat halted at Kom Ombo where we were to disembark to see the Sobek and the Haroeris temple. Kom Ombo is 43 kilometers north of Aswan and we arrived late in the evening. The temple lies on the eastern bank of the Nile. The temple is a Greek-Roman temple. The temple is believed to have been built upon an old temple first constructed by Queen Hatshepsut of the 18th Dynasty. The current temple was constructed at the time of Ptolemy VII-XII, around 200 BC and is dedicated to two Gods. The first God is Sobek, the crocodile God who used to be worshipped in the pre-dynastic times and the second God is Haroeris (a form of Horus), the Solar god of war. 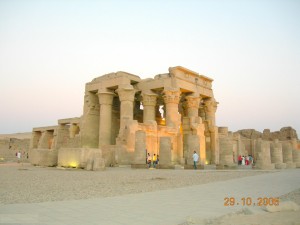 Even today, you can see a crocodile mummy which is preserved in the chapel of Hathor located on the right side of the temple entrance. After having soaked in some more history and having seen one of the most amazing sunsets of our life, we embarked back onto our boat to sail towards our next destination. The next halt would be early in the morning at Edfu – where we would visit the Horus Temple. 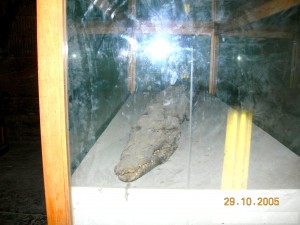 That evening though, there was a special Nubian night on the cruise boat . The Nubian dancers enthralled us with their talent and also gave us an insight into the cultural life of the Nubians. 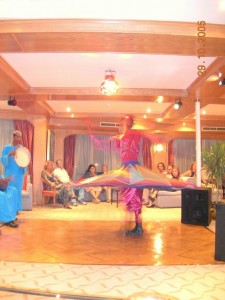 The following morning, we moved to Edfu and at around 0700 hours we disembarked and took a horse carriage to visit the temple of the Falcon headed God Horus. Horu(s) was originally the God of light and his eyes were associated with the sun and moon. The Horus temple was built during the reign of Ptolemy VI. Although the temple is not one of the best preserved ones, it is supposed to be the second largest temple in Egypt after the Karnak Temple at Luxor. An impressive feature of the temple is that it has carvings and engravings in hieroglyphics (the ancient Egyptian script). There are two very beautiful black granite statues on either side of the entrance depicting Horus in the form of a falcon. After spending an hour or so at the temple, we took the horse carriage back to head towards our boat. We reached in time for a sumptuous breakfast before sailing further towards Esna. 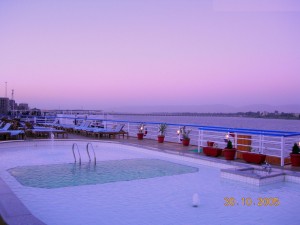 We were told that crossing the Esna Lock would take as long as 6 hours as the Lock allows only one boat to pass at a time. 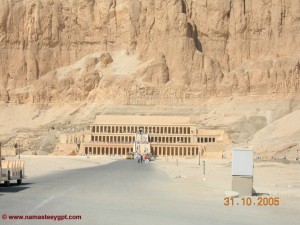 That night, we had an Egyptian costume party and all of us who were part of the Nile cruise got dressed in the best of our galabeyas (the traditional Egyptian dress) and treated ourselves to some fine Egyptian dance and music! This was even preceded by a typical Egyptian meal. 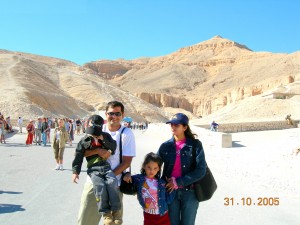 The next morning, we arrived at Luxor – where we disembarked to take a tour of the Necropolis or the City of the Dead on the West Bank of the Nile. On our agenda was visiting the Valley of the Kings, the temple of Queen Hatshepsut and the Colossi de Memnon. We first traversed past the imposing Luxor temple to cross the river Thebes and head towards the west of the Nile. The City of Thebes was the capital of Ancient Egypt – and it this city that is now called Luxor. 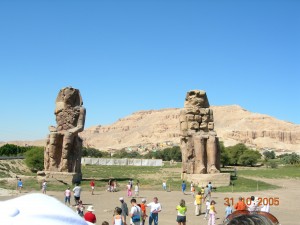 Luxor, by the way is also known as the city of palaces due to the innumerable temples it boasts of. It is known as the world’s largest open air museum as it houses one of the largest collections of ancient monuments in the world – with the imposing Karnak Temple and Luxor Temple as the highlights. The Greeks stayed here from 332 BC to 30 BC. After 30 BC, it was the Romans who came here and they too called it Thebes. In fact,Luxor has been an important city from as long ago as 1300 BC when it was the capital of Upper and Lower Egypt. The portion east of the Nile is called the East Bank and during the ancient times, this was called the City of Life. On crossing the Nile and proceeding onto the West Side, you will find the City of the Dead. Therefore, on the east side there are cult temples whereas on the west side there are mortuary temples. The Cult temples i.e. the Karnak Temples and Luxor temple were built so that people could pray inside during the time of the Pharaohs. 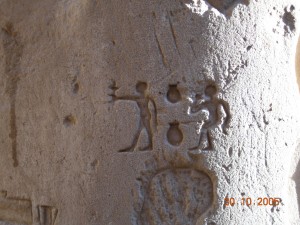 Luxor is famous for its sugarcane as well. About 10% of the region is dedicated to agriculture. As we came nearer to the Luxor temple, our Egyptologists told us that this temple had been built to worship the God Amun Ra. At Luxor, one can also find the Luxor Museum – which houses Pharaonic relics from Luxor and the Mummification Museum , which boasts of the mummification tools that the ancient physicians used, relics of mummies and paintings representing religious funerary rituals. Unfortunately, visiting Luxor and Karnak Temples was not part of our agenda. But I would strongly recommend – especially to those interested in Egyptian history – a two days extended stay in Luxor. 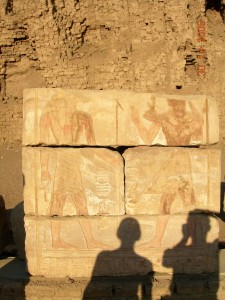 Luxor definitely has lots to offer especially to those who would like to get into the details of the historical importance of its temples. Our first halt at Luxor was at the Valley of the Kings where we found the tombs of the ancient Pharaohs. The tombs are part of the UNESCO World Heritage Site. 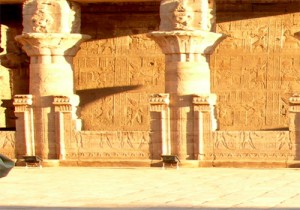 It was Tutmose I, who first decided to built his tomb here. The architect, Ineni excavated the tomb (carved out of rock) located in an isolated valley and built a steep stairway leading down to the burial chamber. This trend set by Tutmose I was followed by all the successive Pharaohs. The highlight of the tour is the Tomb of Ramses IX as it has scenes from the Book of the Dead displayed in the form of pictures along the walls which lead to the tomb. The other famous tomb is that of Tutankhmun which was recently discovered in 1922 by Howard Carter. The remains of the tomb can be found at the Egyptian Museum in Cairo. The tomb has been dated back to 1352 BC. 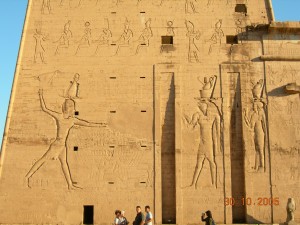 It was believed by the Pharaohs that the name inscribed outside the tomb would ensure that the soul would come down from heaven and come in contact with the body. This would help the body to come back to life! The Pharaohs were very obsessed with the idea of rebirth or life after death.

Here, at the Valley of the Kings one can find 62 tombs. These tombs were constructed in the valley unlike the Pyramids(made on raised ground) so that robbers would not be able to discover the tombs and the treasures hidden beneath. The tombs were constructed as the Pharoahs’ houses of eternity and the paintings within the tombs tell us what the King would be in his second life. All the hieroglyphics within the tomb are colourful especially those of Ramses IV and Ramses IX which we visited as part of our tour. After the Valley of the Kings, we went to see the Valley of the Queens and the tomb of Queen Nefertari which is beautifully decorated with murals and inscriptions. Queen Nefertari was the most favourite queen of King Ramses II. The paintings on the wall in her tomb are very beautiful and fragile and thus only 150 tourists are allowed to see the tomb at any one given time.

Our next stop was at the mortuary temple of Hatshepsut which is located at Deir el Bahari. Queen Hatshepsut was the daughter of Tutmose I and wanted to rule Egypt. But women were not allowed to rule. So she gave gifts of gold to the priests who made up the story that Hatshepsut was born from the God Amun. She ruled Egypt for almost 19 years: she dressed like a man, wore men’s clothes and even a false beard! The Hatshepsut Temple points towards the east and consists of a series of vast terraces which by means of a ramp lead to the sanctuary. This masterpiece rises by means of three broad columned terraces from the desert floor against the backdrop of a limestone cliff.

After Hatshepsut’s death her son Tutmose III buried her and destroyed her body and the temple as he wanted to become King. So the temple hasd to undergo around 70% restoration later on.

Our last stop on the west of the Nile was – Colossi de Memnon . There are two giant statues of Amenhotep II standing alone at a place that used to be the entrance to the city. These statues were meant to scare the enemies and drive them away with their magic spell. The two giant statues are 20 metres high, 2 metres long and 1 metre thick. They were cut out of single blocks of sandstone. The statues were partially damaged by an earthquake in 27 B.C. During those days, it was observed that these statues uttered an indefinite prolonged sound at sunrise. Later, it was discovered that there was a big hole in one of the statues and the sound was generated by the wind passing through that hole . The hole was later blocked.

After this tour, we headed towards the East Bank, grabbed a quick bite at McDonalds and departed by road in a convoy to the beautiful Red Sea beach resort Hurghada !