Egypt stretches from the Red Sea on one end to the Mediterranean Sea on the other. So options are aplenty: there is Cairo, the Nile Cruise, Abu Simbel, Sharm el Sheikh, Hurghada and Alexandria. We decided to leave out Abu Simbel and Sharm el Sheikh from our itinerary due to time constraints. However for an avid traveller, both these places should be included in the“must-see” list of your Egyptian Tour. Once we had arrived Cairo and traversed the modern Heliopolis area as well as the ancient part of Cairo, and passed the Nile river, we arrived in Giza. There, we checked in at our hotel which overlooked the majestic Pyramids! 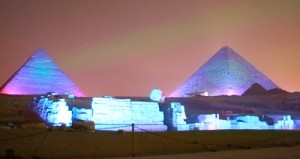 From October until March is the best time to visit Egypt. On our arrival at the capital city, it was a pleasant 18ºC. Seeing the Pyramids from the balcony of our hotel room, we were re-energized! We started our first outing the same evening – the Sound and Light Show at the Pyramids. 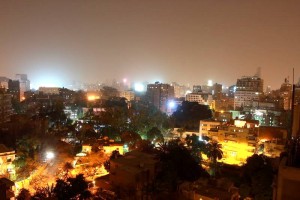 The Sound and Light Show which lasts for one hour takes you back in time narrating the mysteries of the Pyramids and the Sphinx. The show depicts the story of building the Pyramids of Cheops, Chephren and Mycerinos as well as history of the great figures of ancient Egypt including Nefertiti and Tutankhamun. Although we paid some fee for a video camera, it would not be advisable to take a video unless you have a professional camera (not a handycam). After the show was over we dined at a restaurant and retired for the day. 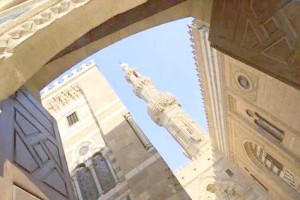 The following morning we visited the Egyptian Museum which is a must-visit for any first time traveller to Cairo. We had a very efficient guide who planned to cover the Egyptian Museum during the first part of the day and later bring us back to Giza to see the Pyramids and Sphinx on the same day. Cairo is the biggest city in Egypt and has a population of over 17 million. Alexandria which was also in our itinerary is the second biggest city of Egypt. It overlooks the Mediterranean coast and has a population of 7 million people.

En route to the Egyptian Museum, Randa, an Egyptologist who had qualified as a tour guide after 4 years of study on Egyptian history, gave us a brief background of Egypt: this was very interesting indeed. Egypt had earlier been divided into Upper and Lower Egypt and many kings had tried to unite the two regions. However, eventually it was King Narmer who succeeded in uniting the regions. He belonged to the first of the 31 dynasties that ruled Egypt. Cairo and the Nile Delta were parts of Lower Egypt whereas Luxor and Aswan belonged to Upper Egypt. So the unification happened in 31 B.C. which was almost 5000 years ago. Memphis was chosen as the capital of Ancient Egypt. Memphis is one hour away from Giza by road. 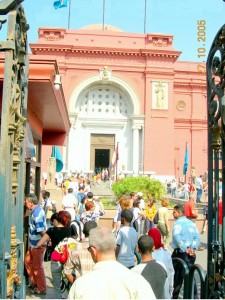 Another place which could be visited to unearth ancient Egyptian history is Sakkara which is on the West Bank. Sakkara is also known as the City of the Dead. Here, you can find the first ever Pyramid built : the Step Pyramid of Zoser, the pharaoh who founded the 3rd dynasty. The Pyramid which is a funerary complex was built by the architect Imhotep whose name is found inscribed in hieroglyphic characters on the base of the statue representing Zoser.

At the entrance of the Egyptian museum, there are two statues on either side of the gate, one holding the Papyrus flower and the other holding the Lotus flower. These flowers are supposed to be the emblems of Upper and Lower Egypt respectively. From these flowers, essence used to be extracted to make perfumes. The Egyptians are well known for extracting this essence – hence, Egypt is as famous for its perfumes as for its Papyrus paintings. 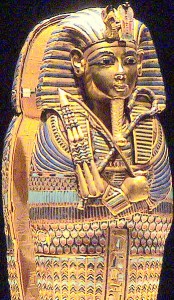 Cameras are not permitted within the Egyptian Museum. So you are advised to click pictures of the Museum from the outside and then leave your camera in your vehicle before entering the museum. The Egyptian Museum houses the largest collection of ancient Egyptian artifacts in the world. It was established in 1900 and only recently, it completed 100 years of its existence. It has art and artifacts dating back almost 5000 years. The exhibits are spread over 2 floors. There are over 100000 objects from the Pre-historic to the Greco-Roman era. Besides all this, the museum also houses a big library.

It is practically impossible to see everything and but one would be advised to go through the major displays at least. One place you just cannot miss is the Tutankhamun chamber where you find the gold coffin of Tutankhamun which was excavated from the Valley of the Kings in Luxor in 1922. The coffin itself weighs 450 pounds and is made of Solid Gold. It was probably the finest ever work of gold I had ever seen in my life. Another must-visit is the Mummy Room within the museum. The Mummy Room has an amazing display of restored mummies dating back to centuries. In the Mummy Room, we came face to face with some of the great rulers of ancient Egypt including Ramses II, the greatest pharaoh of all time.